Edward Mellanby and study of rickets

Rickets in young children, known for centuries as the English disease, was fully described in 1650 by Francis Glisson, Regius Professor of Physic at Cambridge, and also four years earlier in a thesis presented to the University of Leyden by Daniel Whistler, a medical student from Oxford. Whistler published a monograph titled “Inaugural medical disputation on the disease of English children which is popularly termed the rickets.”

It was in 1919/20 that Sir Edward Mellanby, an English physician, working with dogs raised exclusively indoors (in the absence of sunlight or ultraviolet light), devised a diet that allowed him to unequivocally establish that the bone disease, rickets was caused by a deficiency of a trace component present in the diet. 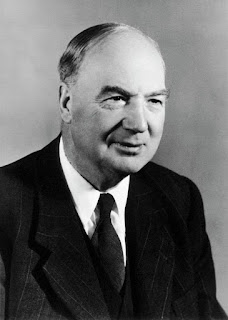 Vegetable oils such as olive oil, cotton seed oil and linseed oil permitted development of rickets, where as it could be prevented or cured with cod liver oil or egg yolk. Mellanby concluded that a vitamin substance preventing rickets was present in these fats.

In 1921 he wrote, "The action of fats in rickets is due to a vitamin or accessory food factor which they contain, probably identical with the fat-soluble vitamin." Furthermore, he established that cod liver oil was an excellent antirachitic agent.

Mellanby had presumed that calcium and phosphorus were adequate in all of his rachitic diets but it was soon established that all of his diets were relatively deficient in calcium and lacked favorable calcium phosphorus ratios. Mellanby’s work clearly established the role of diet in the cause of rickets.
Edward Mellanby and study of rickets
at 7:24 AM
‹
›
Home
View web version